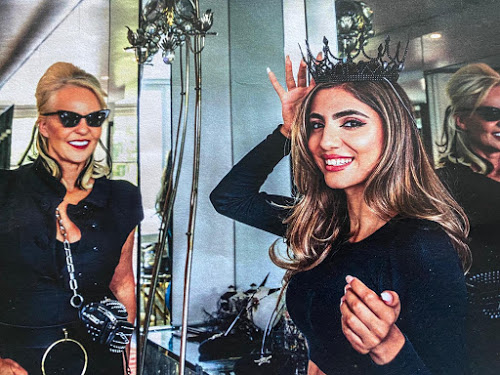 I was on television in a documentary called Inside Chelsea on BBC 2 with the lovely Mehreen Baig. I was originally told it would be about the history of Chelsea, but of course it ended up turning into a show bashing the rich, so I was a little annoyed.  Mehreen Baig said she  had a ‘culture shock’ when she visited Chelsea. Personally I simply don’t believe her,  she was an English teacher with a love of Shakespeare. Mehreen was also too interested in Beyonce!.  At one point Mehreen said “she just wished we would open our eyes to how other people lived”.  Isn’t that a bit patronising to the “other people”. Mehreen is a teacher who professes that because of her students’ background, not all of them will become successful regardless of effort. Yet she failed to see the irony, which was that all the people on the programme were poor as children. They did not inherit any wealth. Not even Alison. My friends are all hard working characters.

As Mehreen sits in her flat in Tottenham she should feel used.  I actually wanted to do the more positive version and see if two worlds could mix. This is what our reality will be in the future.  You see I was born with nothing but charm and a cheeky grin. My Mother worked hard as a Music Teacher and an Opera singer when I was a child. My grandfather was The Film Director Sidney Gilliat, but gave her no money at all. She was a single parent mother. Like the women in the tower block Mehreen comes from. My mother’s money was made of elastic. She sent me to pony club by selling whippets, she paid for my lessons by teaching and breeding Welsh ponies.  I went to Stonar a girl’s private school, then I went to a finishing school  at 16 called Winkfield Place so I had training to earn my own money. Mehreen had many more advantages than I did. Her father took her to school and helped pay the bills. My Father Anthony Cave Brown wrote books on spies and slept with a gun under his bed. I met him at 22, he left me nothing.  I just had optimism humour. and I just knew I would be okay.  Nicky Haslam went to Eton but he suffered from Polio as a child, we all have our trials and tribulations. George Blodwell lives on the edge in Hollywood but has been very successful as a stylist.  Alison Jackson photographer  was cut out of her inheritance due to being a girl. I did not go to drama school until I was 28 and had earned the money to do so. Mehreen went to UCL and was given many chances and now features on our Television Set.

I come from a wacky  breed of human who are happy to fight back with wit and a smile. Will Mehreen take me on? Will she show me Tottenham or shall I go with someone else?  I truly liked Mehreen. The problem in Great Britain is people like Dr Gopal, who we gave chances to, and was educated well and works at Cambridge University, tweets out that “White people don’t matter’  is a race baiter from Cambridge University, this in turn creates havoc and holes in our society.

The only rich person on the programme was the dashing Russian, Yevgeny Chichvarkin, who had left Putin’s Russia through the back door, and apparently with only a yellow plastic bag?   He promptly opened a shop in Mayfair selling bottles of wine worth thousands of pounds which most people would buy from Sothebys.  He plays polo with the Princes and my friend Eddie Horswell. I adore Eddie Horswell and he is one of the best polo players in the world.  He was best man at my first wedding.  Yevgeny’s wife was very upset as she felt she would never be accepted and that there was so much crime in Chelsea. I have lived near the Kings Road for 32 years and everybody here is charming I am sure they will let her in and be friends with her and I am sure they will make her feel safer than Moscow.

I took Mehreen out to a Mad Hatter’s Tea Party for Victoria Grant hats at  Masterpiece  an art fair and later a Fashion show at Harvey Nichols with my friend George Blodwell.  The Chelsea I introduced Mehreen to was inhabited with intellectuals; I had a lunch for her which included my friends,  the writer Nicky Haslam, Portrait Painter Howard Morgan, and one councillor/artist Alison Jackson, who took her to a council flat with the best view In London at Worlds End.  We met jeweller Stephen Webster, Anastasia Webster and we went to Harvey Nichols for a Fashion Show.  We finished by going to my friend Vicki Sarge’s jewellery boutique on Elizabeth Street.

As the filming progressed I warmed to Mehreen.  I even asked if I could meet her parents.  I do not believe she felt insecure she only sounded political given the real subject. In my opinion it was a wasted opportunity it would be interesting to see if a girl from Tottenham could actually fit in in Chelsea, and vice versa.. Mehreen liked me she just felt  obliged to get her nails in.

I love Pygmalion opportunities, a rags to riches story, we all do. I was one myself.  My Grandfather was was a film director and my Father, Anthony Cave Brown an award winning writer of spies neither looked after me financially or indeed took me to school. Of course being an English Girl from Wiltshire  I knew the ropes of all society in the United Kingdom and of course I was lucky to meet an equally young clever man when I was 25.

Thanks to  the tenacity of Label1 TV, Michelle Liebentrau, my brilliant agent and the BBC there were only a few dodgy moments for the TV channel that ultimately we all pay for, so I will leave it there.