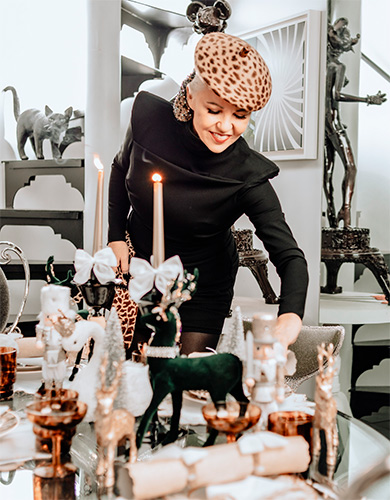 Amanda Eliasch is an English photographer, artist, poet and filmmaker.

Her first black and white photographic show was ‘Three Way Mirror’, held in London in 1999 at The Cork Street Gallery. Her photography work often consists of glossy fashion-shoot images and black and white nudes. In November 2001 she exhibited a series of photographic contact sheets in a London exhibition, at The Proud Gallery, called ‘Peep’.

Her early work was given a review in British Journal of Photography. Her portraits of 47 British artists were published (with text by Gemma De Cruz) in British artists at work in 2003, and were chosen by both Publishers Weekly and Art Monthly for their lists of seasonal highlights; the collection was also published in French as Artistes contemporains: Londres. From this book Eliasch started her own collection through photographing and entertaining many artists including Tracey Emin and Polly Morgan in her St Tropez home. According to photographer Bob Carlos Clarke, she served ostrich eggs for breakfast.

In 2008, Chipmunka Publishing published her book of poetry, Cloak & Dagger Butterfly. Based on the book and a letter she wrote to her father, a theatrical production was produced by Eliasch As I like it at London’s Chelsea Theatre in July 2011; later that year it was transferred to the Macha Theatre in Los Angeles. In 2010 she published Sins of a Butterfly, a poetry collection. During the Summer of 2011 Eliasch produced the Rebel Show of James Franco at the Venice Film Festival with Liberatum.

Eliasch exhibited artworks in July 2011 at the Leadapron Gallery, Los Angeles. Called Peccadillos, the exhibits were neon sculptures inspired by cartoons of her committing the seven deadly sins with neon artist Michael Flechtner is a neon artist in Los Angeles, who made stamps for the USA from his neons. in Los Angeles, they were drawn by her friend Kay Saatchi. The exhibition later transferred to the Doyle Devere Gallery in Notting Hill Gate, London.

The same year, Eliasch worked as a film director and writer, making a “jarringly frank” documentary drama The Gun, the Cake and the Butterfly, which contained the line: “When a woman confronts her loneliness she is free.” It was based on her book and the theatrical production.

In 2013 it won the Lena Wertmuller prize for best Documentary Drama and was screened at the Ischia International Film and Music Festival and the Bel Air Film Festival, Los Angeles, where she won Best Edit and best documentary made by a woman. The film has reportedly been called ‘shockingly frank’ by critics. She was presented with ‘The Most Imaginative Documentary Film Award’ at the 11th Annual Ischia Global Festival in June 2013. It received an honorary award for the ‘Most Imaginative Documentary’ at the New York City International Film Festival. She was named Best Female Director at the Burbank Film Festival and won the most exceptional documentary award at the La Jolla Indie Fest.

In 2014 she was the producer of The Vortex by Noël Coward at the Matrix Theatre in Los Angeles.

She confronted her doppelganger who was using her name to gate crash parties. 2016 Her work appeared in Desire Magazine The Laboratory Collective.

Since 2008, Eliasch has also worked as the fashion editor for Genlux Magazine in Los Angeles.

Amanda has just featured in a documentary called “Inside Chelsea” with Mehreen Baig September 2020.